Virtual reality is finally here, and it's more accessible than ever. All you need is the right headset and a good smartphone to immerse yourself in a whole new world. Tzumi's Dream Vision VR headset claims to do just that, but with a price tag that will have even the most frugal shopper giving it serious consideration. The Dream Vision VR headset is perhaps one of the best and cheapest ways you can experience virtual reality if you own a smartphone.

Picking out a VR headset in 2018 can be a daunting task, especially with the number of new VR headset devices hitting the market. Let’s not forget the great deals on high-end VR headsets appearing all the time. The good news is if you are in the market for top-notch VR headsets, they are now much more affordable thanks to permanent price drops. The bad news is, these drops make it even trickier to choose a VR headset. With that in mind, is the Dream Vision VR headset the best device you can get in a competitive VR market?

What VR Is And How It Works 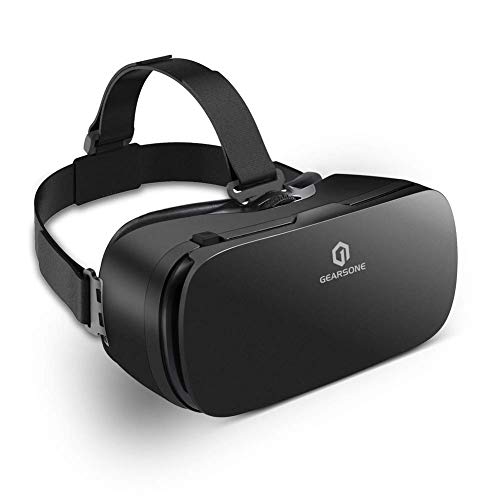 How does virtual reality work? How does a virtual reality headset make you think you are at the edge of the tallest building in the world, when in fact, you are about to bump into your dining table.

Virtual reality is a fascinating way to travel using nothing more than technology. With the right VR headset and motion tracking, this device lets you take a tour of virtual space as if you are there. It’s been a promising technology for decades that hasn’t had the chance to catch on. However, that is quickly changing with the vast majority of VR headsets currently available.

In the VR world, Sony leads the pack with its excellent PlayStation VR, the Oculus has the Rift, while Valve and HTC have the stream-friendly Vive. Modern VR headsets fit under more than one category. They can be tethered or mobile. The mobile headsets are shells that have lenses where you can input your smartphone. These lenses separate the screen into two separate images for your eyes, turning your smartphone device into a VR device. This is because your phone does all the image processing, and there is no need to connect any wires to your headset. 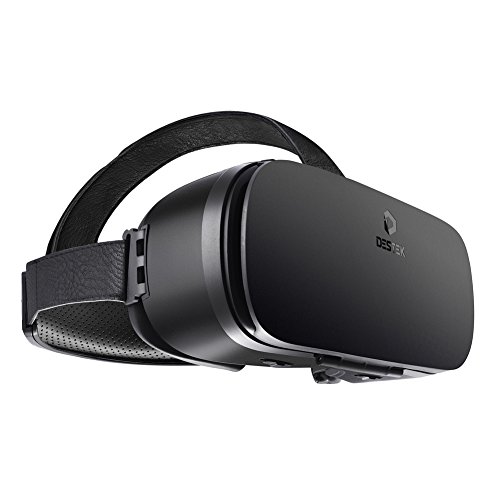 So, what’s the difference between the tethered and the mobile VR devices? You can’t count on position tracking when you are using your mobile device headset. Mobile device headsets use three degrees-of-freedom (3DOF) motion tracking. With 3DOF, users can only follow the direction that they are facing but won’t be able to tell if they are moving backward, forward, up, down, left, or right. To accurately track your position, you need a VR headset with 6DOF (six-degrees-of-freedom) motion tracking. All kinds of tethered VR headsets have this capability due to outwards facing cameras or external sensors.

Tethered headsets like the PlayStation VR and the Oculus connect to PCs physically. The cable used makes them a bit unwieldy, however putting all the actual video processing inside a box and not having to strap it to your face directly means your VR experience will be more involved. The use of a dedicated display headset instead of a smartphone, as well as external cameras and built-in sensors significantly improves your head tracking and image fidelity.

Therefore, the trade-off apart from its clunky cables is the price tag. You will still need a pretty powerful PC to run. 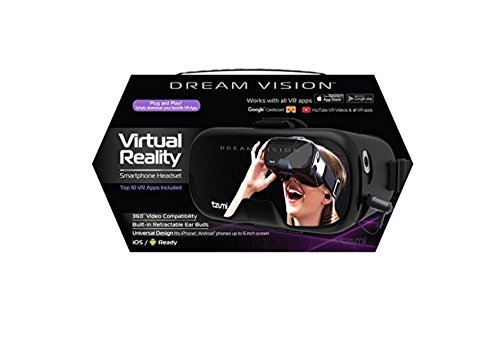 The Dream Vision VR headset is a smartphone compatible headset, meaning your smartphone does most of the actual processing. However, most of the crucial features, come down to how the headset is put together by the manufacturer.

If there is anything like a standard device for a VR headset, the Dream Vision certainly hasn’t done a lot to distance itself from it. And from a design standpoint, there isn’t much of a difference between the Dream Vision VR from its close competitors. Honestly, that’s not entirely a bad thing. If the design works, why reinvent the wheel?

With that in mind, there are a few design issues of the Dream Vision VR headset that quite don’t pass muster. And one of the major problems is the size of the smartphone casing. The Dream Vision VR headset can only work with smartphones that are around six inches in length, meaning a fair chunk of the market has been cut off from being able to be used by the Dream Vision VR. What makes this a serious problem is, the bigger phones usually have better screen quality. This means the manufacturers have sacrificed image quality to make a smaller product.

On a more positive note, it feels like this device is designed for an average human head. The Dream Vision VR headset fits well and is easy to adjust. This is something that needs to be standard for all VR products at this point. If you are looking for a headset that won’t hurt, the Dream Vision VR is a good choice.

This is not an area where this device is naturally expected to thrive. Most smartphone VR headsets are designed with the presumption that the users will use their earbuds. The manufactures of the Dream Vision VR actually put some effort into the audio with its retractable earbuds. While this step isn’t necessary, it’s a welcome surprise.

The Dream Vision VR headset's earbuds aren’t anything to write home about, but they are a nice addition that makes for a somewhat less complicated experience for the user and also makes storage a snap. You’ll need to be careful with the earbuds though since they are known to break. The Dream Vision VR has an onboard microphone as well, which is also nice.

Just like any other similar VR headset on the market, the bulk of the visual performance will largely depend on the type of phone that you have. Therefore, if you are using an older phone, you are likely to run into some problems. This, however, in all fairness, would be the case with any smartphone-based VR headset.

For most users, this is a make or break since it reduces the number of potential apps you could use with the Dream Vision VR. It’s very important to check and see if your potential apps need any controls that are more complex than the ability to tilt your head.

The Dream Vision VR headset has a 2.3 out of 5 stars rating based on consumer reviews on Amazon.

You are probably considering buying the Dream Vision VR headset. It’s new, has the right price tag, and has a ton of competitive features. The Dream Vision VR has a great build, is sturdy (apart from its earbuds), and it is built to last a long time.

But even so, there are a significant number of VR devices out on the market. For one, Tzumi (Dream Vision VR manufacturer) has put a lot of effort towards ensuring that its product has competitive features. However, we did mention that the maximum size of the phone is six inches, which is disadvantageous. Therefore, to compare the Dream Vision VR with its market, you will need to look at the Samsung Gear VR, Art+Vision VR, and the Google Daydream View.

Also, we checked Amazon customer reviews. Real people write these reviews, and they are an excellent source of information.

To really understand whether a product of any sort is right for you, you need to compare it to the competition. Here, we will take a look at how the Dream Vision VR headset stacks up against the Samsung Gear VR, Art+Vision VR, and the Google Daydream View. 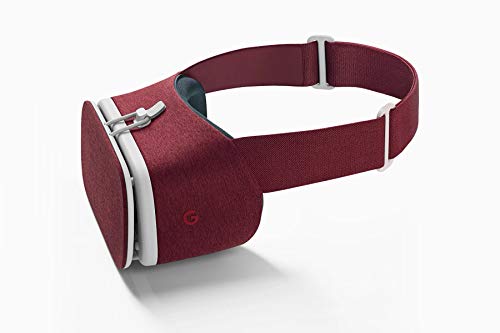 It debuted in 2016, and ever since this device has been turning heads with its unique design, affordable pricing, and innovative controller. This device is similar to its Cardboard concept. You will still be able to put your phone in an inexpensive headset, and it functions as you display. Thanks to a set of lenses that can separate the screen into two images. The Google Daydream just like the Oculus Rift has a pairable remote that you can hold in your hand to control the action.

It’s very satisfying when you get apps that are compatible with it. There’s also an SDK update that allows for simultaneous Daydream and Cardboard support that is helping expand its library. The content has grown from offering 30 titles to more than 200.

The new Google Daydream View has nice fabric and a bit more weight than the previous version. It is available in fog, charcoal, and coral. This new color scheme falls in line with that of the new Google Home Minis helping to achieve a cohesive language between its products.

The Google Daydream View scores a cool 3.7 out of 5 stars rating based on consumer reviews on Amazon. 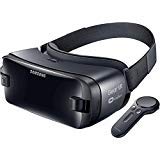 The Samsung Gear VR is one of the best and cheapest ways to experience virtual reality if you own a Samsung smartphone. It is perhaps one of the most accessible VR systems with a catch. To be able to use the newest Gear VR, you will need to have a compatible Samsung Galaxy Smartphone. This significantly narrows down the number of potential users to those who already own compatible Samsung smartphones.

Buying a Samsung smartphone to have compatibility with the Gear VR pushes its price tag to HTC Vive levels. Samsung, however, regularly bundles the Gear VR with its flagship phones. The Samsung VR is much more expensive than the Google Daydream View and the Dream Vision VR. However, it comes with a Bluetooth controller equipped with a touchpad and motion sensing. What’s more, it has an inbuilt touchpad on the headset.

Samsung and Oculus collaborated to come up with the Gear’s software ecosystem, which features a solid handful of games and apps. The newest gear VR from Samsung has a slightly improved design and features a USB-C connector that can be hooked directly into the Samsung Galaxy S9 and Samsung Galaxy S9 Plus. A big drawback is its included wireless controller in the box.

The Samsung Gear VR has an impressive 4.2 out of 5 stars rating based on Amazon customer reviews. 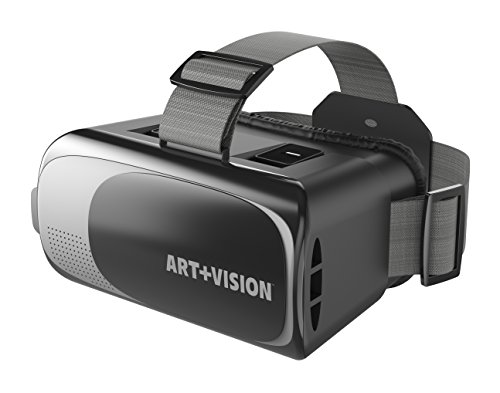 Art + Vision VR device is one of a few affordable options on the VR market that have a lot to offer. It is designed for compact and portable use and supports most Android devices. Just like the Dream Vision VR headset, the Art + Vision VR device has an inbuilt headset system that provides a rich, 360-degree experience. This device, unlike the Dream Vision VR, includes a remote control that allows you to control your device through a wireless operation.

The Art + Vision VR device has a 3.7 out of 5 stars rating based on consumer reviews on Amazon.

The Dream Vision VR headset is a fantastic VR device. As it stands, this device is an inexpensive way to test out the virtual reality world without breaking the bank. It might not be the best system out there, but it is not the most disappointing. While you won’t be getting a picture comparable to the Samsung Gear VR or Sony’s PlayStation VR, it will give you a better perspective on whether you would be willing to invest more into VR. At the end of the day, this is a crucial factor to consider before buying this particular device.